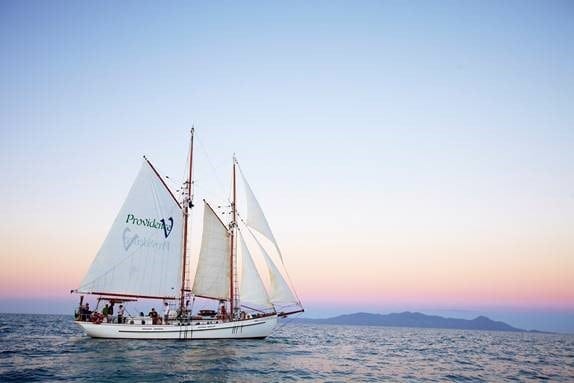 Local Discount $169 per person – call or email for this discount price / no credit card fees.

If booking online it is full price + fees.

Inclusion & What to Bring

1 Reviews Rated an average of 5 out of 5 stars by 1 reviewers.
on May 18, 2019
"Great day out!" by Annabelle Appleton
We had a fantastic time on this day trip, highly recommended. :)
Leave a Review

Cancellation Policy:  No refunds offered once you book this tour

Providence V is a unique vessel – a 62-ft gaff rigged topsail Gloucester schooner. Her builder was an Ozzie guy who’d fought in the Korean War. His reward was to be trained as a boat builder. He began building cray boats down south and then moved to Queensland when they found prawns in the Gulf, to build prawn trawlers. But his real passion lay in wooden boats. In the mid 80s, he decided to build the ultimate schooner so he travelled, with his wife, up the east coast of America. He finally found his ultimate schooner. The builder saw four Providences on his journey north so he named this boat Providence V. Providence is the capital of Rhode Island so it’s not surprising it was a common name for vessels.